The recent arrest of Jamia student Asif Iqbal Tanha and two JNU students, Devangana Kalita and Natasha Narwal, both activists with Pinjra Tod, shows that the Union home ministry is convinced the ‘Bhima Koregaon model’ works and must be replicated.

What is this model? You start with a few arrests, for instance, the first round of the Bhima Koregaon five or the Jamia students Safoora Zargar and Meeran Haider. Then you widen the net indiscriminately to build up a picture of an immense threat to the nation from a nexus of Dalits and Maoists, Islamists and Marxists or whatever. In actuality, the major threat this government fears is the Constitution, in whose name all these activists have worked, and which the ruling party wants to gut.

As with the Bhima Koregaon struggle which was a symbol of Dalit assertion against neo-Brahminism, the BJP government is trying to completely change the narrative around the anti-CAA protests. At least six clear motives appear to be at work in both cases.

Gross abuse of power by UP Govt & Police

When it comes to the gross abuse of police power by the Adityanath administration in UP and its intolerance of press freedom, it is clear that COVID-19, the lockdown and social distancing make no difference whatsoever.

Yesterday, April 10, at 2 pm a plainclothes man came to our home and said he had come from the Ayodhya ‘prashasan’ to serve notice on Siddharth Varadarajan. He would not give his name. I told him to leave it in the mailbox. He refused.

At 3:20, he came with 7-8 uniformed men (at least 2 not in masks) in black SUV, no number plates. Only two identified themselves. On insisting, they gave plainclothes man's name as Chandrabhan Yadav, not designation. They said they’d driven from Ayodhya for this urgent work!

They refused to let me sign the notice—"Our rule is not to give it to women and minors”—. When asked to be shown the rule, they sought instructions on phone and let me sign. Then, they phoned their boss to say “notice has been received”.

The notice asks @svaradarajan to appear in Ayodhya April 14, 10 am (when lockdown will still be in force) in connection with FIR registered by the police for a factual @thewire_in story which said Adityanath & others had attended a religious event in Ayodhya after the lockdown.  The link is below:

Posted by Nandini Sundar at 8:43 AM

Which are the Wars Worth Fighting?

As India wages a war on coronavirus, it is important for the country to sort out its priorities.  The only other war that must accompany the lockdown is the war on hunger, and all other operations must be suspended. When the Supreme Court has asked the states to see if undertrials can be released, there is little logic in arresting more people. When the government’s first priority must be to save lives, it cannot afford to lose more lives.

The recent death of 17 jawans or 19 if one were to believe a recent Maoist press release, the wounding of some 14 others, as well as the death of some 3 Maoists once again underlines the futility of the war in Chhattisgarh.
Read more »
Posted by Nandini Sundar at 12:51 PM

Seeking Truth and Reconciliation in Chhattisgarh

The Indian government claims it is slowly but surely winning the war against Maoist guerillas in India’s resource rich forested regions, and has consistently dismissed widespread accusations of human rights violations as propaganda by Maoists or their urban supporters. It has also acted to preempt future accusations by jailing human rights activists and lawyers working in these areas. But as a recent report by a government appointed enquiry commission shows, these accusations are credible and need to be addressed.
Read more »
Posted by Nandini Sundar at 8:00 AM

Five Acres in Lieu of Citizenship: Parsing the Ayodhya Verdict

The Muslims of India approached the Supreme Court for affirmation of their citizenship.  Instead, they were given five acres of land.

In their verdict on the Ayodhya dispute, the bench recognised “it is necessary to provide restitution to the Muslim community for the unlawful destruction of their place of worship.” But in sharp contrast to their lengthy exegesis on other issues – like the indubitability of faith, the archaeological evidence for a temple below the mosque, the way that historical texts must be read – there is absolutely no discussion of what ‘restitution’ means, and more importantly, what it might involve in this specific context.
Read more »
Posted by Nandini Sundar at 3:32 PM 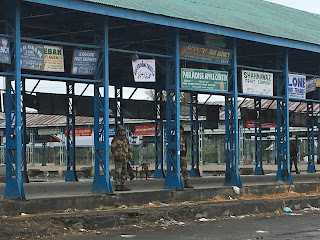